The 1981 PATCO air traffic controllers' strike was one of the largest strikes by federal employees in the United States.  This strike had ramifications that would be felt world wide by the working classes, especially in the United Kingdom and New Zealand.  It would also mark the ultimate betrayal by a man whose reputation for selling out workers to serve his personal and political ambitions.  That man was Ronald Reagan.

The Professional Air Traffic Controllers' Organisation was the industry's union. They had been incorporated in 1968. 1968 was a turbulent year, the Prague Spring, the Paris Riots and the Tlatelolco massacre, where 325 were killed, hapenned abroad while in the US Martin Luther King, Jr and presidential candidate Robert Kennedy were both assassinated.

The reason for PATCO's founding was to ensure good working conditions for air traffic controllers: before then they had been overworked, underpaid and understaffed. They had very low status, little respect among airport/airline staff. The controllers were stressed because of all this, and the stress caused safety issues. At the time there was little awareness of the link between safety and stress.

The controllers were demoralised for all these reasons and the fact that there was no standardisation: the payrates and conditions varied wildly from airport to airport, but on the whole they were poor.

PATCO went a long way in achieving better conditions and pay for their members. They did this through a campaign to raise awareness about safety and how it was linked to stress, fatigue and working conditions.

Leading up to 1981 the union had become quite forceful. As federal employees they were not allowed to go on strike, but they pushed their demands mainly by using sick-out tactics. In previous elections the PATCO had endorsed the Democratic presidential candidate. However, for the 1980 elections PATCO endorsed Reagan, in doing so they sowed the seeds of their own destruction.

Ronald Reagan was born 1911 in Illinois. He had a “strong christian background”, something he would cash in on while campaigning despite the fact that he was divorced.

Reagan worked as a sports radio announcer after attending college. He attended Eureka College, a christian-founded school, that has roughly 570 students and 7000 alumni today. Although small, the college claims to be among the top educational providers in their state for nursing, teaching, communications and criminal justice. I got the impression that Reagan was no scholar: no-one mentions that he was a good student, but he was clearly affable, charismatic and sociable if he got the sports announcer job right out of college. His professional career would prove this to be true to an even greater degree.

Reagan moved into acting after moving to California in 1937. He acted in a few major productions but he wasn't an A-list star. His best known role was in the 1940 biographical movie “Knute Rockne All American”, where he played a football player known as “The Gipper”. His character, called George Gipp, becomes terminally ill. On his death bed he urges team members to “win one for the Gipper”. His most famous line would be later used as a political slogan. 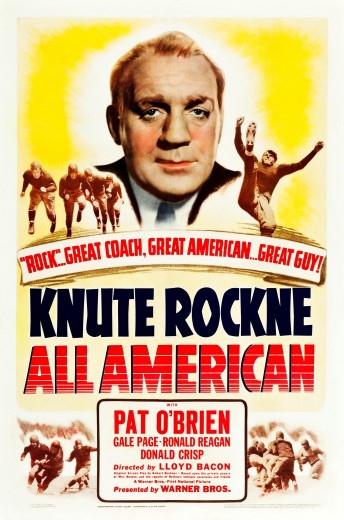 Reagan's political career would take off when he became the leader of the Screen Actors' Guild. He first became a member of the board in 1941. During World War Two he was called up for active service. He had been a Cavalry Reserve second lieutenant since 1935.

Because of poor eyesight he was barred from serving overseas. He served in a couple of units before hitting his stride first in the US Army Air Force's Motion Picture Unit. During the war he made over 400 training films. He left the Army in 1945 as a captain.

After the war he returned to the SAG. He held a couple of different elected positions – Vice President in 1946 and president in 1947. He was re-elected six times. As SAG president he was crucial in getting residuals for actors. Residuals are payments for appearing in reruns.

Early in his political career he had been a Democrat, and had joined left-leaning organisations, like the American Veterans' Association. He oppossed right-to-work legislation then; he also held anti-nuclear views which he was dissuaded from expressing publicly by the studio. He eventually grew convinced that communists were a powerful unseen influence in the industry.

Reagan also led the guild during some turbulent years. In 1946-47 there were a series of labour disputes which troubled the ruling class. The end result was the Taft-Hartley Act of 1947 which restricted union activities, among these were: wildcat strikes, jurisdictional strikes, solidarity strikes, secondary boycotts and donations to federal campaigns were outlawed. The legislation also enabled states to bring in their “right to work laws”. Reagan lead the guild through a strike against the studios around this time. Taft-Hartley remains current today.

Even though Reagan was viewed as someone who was truly capable of enacting change on behalf of the little guy, he was still allowed to lead the guild. Reagan became an FBI informant in the late forties. His code name was T-10. Together with his then wife, they provided the names of communist sympathisers in the film industry to the Bureau. At first the names informers like the Reagans provided were actual sympathisers, but as time went on more and more people were blacklisted. The Red Scare was used as a way to settle scores and to move up in the world – either by improving your career or by hindering a rival's.

Reagan divorced his first wife Jane Wyman in 1948. She stated their political differences, and his duties as SAG president, drove them apart. She was a republican and he was still a democrat at the time. Reagan met his second wife the following year in 1949. They met through the guild, she had been mistakenly placed on a blacklist – she had been accused of being a communist but it was a different Nancy Davis that was the intended target. He sorted it out for her.

In the 1950s he turned to television as film roles were drying up for him. He landed a prominent job hosting a TV series. This raised his national profile.

His television contract with General Electric Theatre included making appereances in GE factories to make motivational speeches to the employees. He often wrote these speeches, and they showed clear themes that reflected the views of his employers: anti-union, pro low-taxes and small government. He continued to play up the communist threat, and implicitly linked union activities to it and to being anti-American.

He became more right-wing, endorsing the Republican presidential candidates in '52, '56, and 1960. He quit his job with GE so he could became a republican in 1962. He opposed Democrat initiatives like Medicare (saying it would lead to socialism and that one day children would be told of the time “when America used to be free”), foodstamps, minimum wage, and the Peace Corps.

In 1964 he would campaign for the Republican candidate, making speeches. A memorable one contained the phrase “a time for choosing”. In the speech he spouses traditional American conservative values, e.g., he complains about high taxes. His rhetoric wasn't enough to turn the campaign around, but he firmly established himself on the national stage as a viable political candidate.

He was elected as the Governor of California in 1967. He campaigned on  welfare issues, promising to send “bums back to work”, and to deal with ongoing protests in Berkeley. He sent in State Troopers, one man was killed and another blinded, many police were injured including one who was stabbed in the chest. The incident became known as “Bloody Thursday”. Afterwards he sent in the National Guard, they stayed for 17 days. Reagan's reactionary ways were well-established by then, he kind of acted unprompted. It had all been kicked off by the occupation of a derelict site owned by the UC at Berkeley.

He was re-elected in 1970. His governorship was a training ground for his presidency: he pursued similar policies like bashing welfare recipients and pursuing a smaller federal government with fewer regulations. In 1976 he made a bid for president. He lost the Republican bid to Ford, who had succeeded Nixon as president. As sitting president Ford's nomination was all but inevitable.

In the 1980 election Reagan was pitted against incumbent Jimmy Carter. In addition to stagflation, the oil shocks, the loss of American prestige because of the Vietnam War and the Watergate scandal; the final days of the Carter administration had to deal with the American Embassy Hostage crisis in Iran. The Reagan campaign made a deal with the Iranians to only release the hostages after the election. Carter was perceived as a bumbler, he didn't really have any stand out achievements that could be seen as his legacy. He was probably going to lose anyway, but the Iranian deal didn't help.

The PATCO strike began on August 3rd 1981. The organisation had had poor relations with the Carter administration, and Reagan had endorsed their struggle against the FAA. They had maybe thought that he would be sympathetic because of this and his background in the SAG.

Over thirteen thousand controllers began the strike. They were aware that as federal employees they didn't have the legal right to strike, however, the union strongly mantained that striking was a human right. The organisation didn't believe, didn't expect that the Taft-Hartley would be invoked.

Reagan threatened to fire all strikers who didn't return to work within 48 hours. Over 11,000 were dismissed. PATCO ended up being decertified, dissolved. The US government had predicted that staffing numbers would return to 1980 levels within two years. It took until 1990 for staffing levels to return to pre-strike numbers.

Despite having widespread working class support, the strike was isolated and defeated by the (The American Federation of Labor and Congress of Industrial Organizations) AFL-CIO bureaucracy who ensured that critical ground transport and airline unions crossed the picket lines.

Reagan's treatment of the strikers was closely watched by employers around the world. It dealt a blow to the labour movement in the US where the strike was seen as a watershed moment. It is referred to as the “Strike that broke the Labour Movement”. It encouraged employers to use strike breaking tactics of their own like hiring scabs and picket breakers.

Reagan's harshness added to the milieu of the times. While at the time she was in a strong position at home thanks to the Falklands War victory, Thatcher may  have drawn inspiration from this strike when dealing with the miners in 1984 – the strike set a precedent where the state dismissed virtually an entire workforce all at once.

The strike set the mood for labour relations for years to come. It made union officials fearful and indisposed to taking industrial action, it dampened the number of strikes for decades. It contributed to the end of the post-war boom, effectively bookending thirty-something glorious years of material advancements for the working class.

Since 1980 non-elite wages have stagnated, and in real terms working class Americans work longer hours and have fewer benefits than they did then. Working conditions have deteriorated, with employment becoming ever more precarious – this is the flexibility that employers demand, part of the free market reforms brought in by the Chicago School of Economics.

The strike didn't cause the worsening in conditions, the austerity-type reforms were on the cards anyway, mainly because of the sway Friedman and his cohorts had on the capitalists of the time. The strike-breaking was used as a way to deal with the increasing discontent within the working class, it was used as a catalyst that enabled the restructuring of the economy. The economy went from manufacturing to being service-orientated. The transition was already underway but the strike underlined that change was unstoppable, and it made the change somewhat palatable to the masses. It marked the beginning of the “Neoliberal” era, which plagues us to this day.