It’s been close to a month since the Deepwater Horison Oil Rig exploded and sank into the Gulf of Mexico, just 45 miles south of the already beleaguered gulf coasts of Louisiana and Mississippi. The ensuing oil spill may well surpass that which followed the wreck of the Exxon Valdez, which poured over 11 million gallons of oil into Alaska’s Prince William Sound in the spring of 1989. British Petroleum, which was the operator of the oil platform, had been leasing the rig from the deep seas drilling conglomerate TransOcean.

BP initially estimated the daily oil spillage to be 1,000 barrels. Within a week of the disaster, that figure was ratcheted upwards by the United States National Oceanic and Atmospheric Administration to be 5,000 barrels daily. This works out to 220,000 gallons of oil a day or a loss of better than a million gallons weekly.

According to the U.K. Guardian, specialists in the industry believe the explosion that shook the Deepwater Horison on April 20th was caused by a methane bubble that travelled through the drill column of the platform, which ruptured seals and barriers before actually bursting. The explosion claimed the lives of 11 workers on the platform, and 115 more had to be lifted out away from the conflagration. British Petroleum officials assert that blow-out prevention devices installed as a safety feature within the industry failed, but information coming from such sources as BP raises questions about the depth of commitment BP had in installing such devices, which might have at least limited the spill's actual scope.

The spill remains out of control at the time of this writing, and industry officials as well as government oversight specialists do not foresee any resolution to this crisis until the end of June. Assuming the daily loss figure is accurate – and there are a number of specialists who think the above projections are conservative – there can be at present no accounting for the immense damage this spill will very likely inflict upon the crabbing and shrimping industries of the South Eastern United States, or the further destruction of the already fragile ecosystem in that region.

Current strategies employed by British Petroleum to plug or cap the spill (big underwater domes, small underwater domes, industrial robots, and siphons, according to the Wall Street Journal) have seen only minor successes, or have been derailed by rapidly freezing mixes of natural gas and water caused by frigid water temperatures found at deeper ocean depths, even in the Gulf of Mexico. They have also used a highly toxic chemical called Corexit, an Exxon Company-manufactured dispersal agent which poses substantial dangers to both aquatic and aviary wildlife. None of these efforts or solutions has even taken into account how the spill may affect the ecologies and economies of Mexico, Central America, the Caribbean Basin, or northern South America. Since no one is sure how the oil carried by ocean current will disperse, all of these questions are wide open.

The surface area of the spill is quite large, and satellite imagery suggests it could be several times larger than current estimates, possibly the equivalent in length and width to the island nation of Puerto Rico. Ocean borne tar deposits have already washed up into areas west of the Mississippi Delta and have been seen as far east as the Alabama border of Florida.

Surely, British Petroleum is largely to blame. After all, it was BP which had recently acquired oversight of the Texas City Oil Refinery when an explosion at that site occurred in 2005, killing 15 workers, injuring close to 180 more, and requiring emergency services for 43,000 people in the vicinity. BP had already acquired a reputation for its industry practices in Alaska, where disintegrating pipe welds had resulted in spillage of 200,000 gallons of oil into northern tundra just a few years before the Texas City disaster. The company has a somewhat consistent history of operating rather haphazardly in an industry which entails a great deal of industrial and environmental risk.

Be this all as it may, British Petroleum is far from the sole culprit. Other corporate heavyweights are as culpable as is BP. According to the Kansas City Star in an article posted May 11th, the main players in the Deepwater fiasco are spending a great deal of time pointing their fingers at each other. When British Petroleum, Transocean and that noble friend of the working poor, the Halliburton Corporation, appeared before Senate hearings led by the United States Senate Energy and Natural Resources Committee, all these fine entities took turns “naming names.”

Lamar McKay of BP argued that since the blow-out prevention devices were owned by Transocean, they were largely to blame. Transocean CEO Steve Newman turned and suggested that since Halliburton was the cementing contractor, and hence, “responsible for encasing the well in cement and ensuring its integrity, Halliburton was at fault. Halliburton is certainly no newcomer to public charges of venality and corporate manipulation, having literally made a killing via war speculation in Iraq in recent years. But Halliburton exec Tim Probert turned and dropped the charges back into BP’s lap, saying that since Halliburton was sub contracting, and not owner of the well, it was contingent upon BP as “owner of the well and ulti 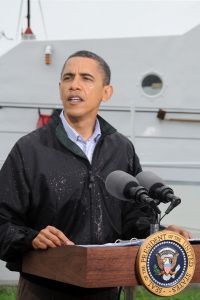 mate authority to decide how and when various activities are conducted.”

And so we’ve come full circle. Must be that free market “efficiency” we’re hearing so much about these days.

And let's not forget the role of the government regulators and licensing agencies, which, at least on paper, are supposed to defend the public interest. And yet, their reaction to the spill was lethargic at best, even after the experience of Katrina. Not to mention the fact that BP was never prepared to deal with a disaster on this scale, despite their claims to the contrary. Objectively speaking, it’s not unreasonable to argue that BP is allowed wide latitude because of the other functions it serves within the imperialist order. The company has been one of the largest suppliers of fuel to the Pentagon since the onset of the current U.S. campaign in Iraq and other parts of the Middle East. According to figures at the Defense Energy Support Center, BP attained $2.2 billion dollars in revenue from sales to the United States Defense Department just last year. And at the end of the day, business is business. The chorus that proclaims as much is just getting started.

An article about the Deepwater Horison disaster which appeared in the May 6th issue of the Economist concerns itself more with the need of the western powers to prevent potential nationalist elements in Africa, Iran, Venezuela and Russia from taking a larger stake in the world oil markets. “The Gulf of Mexico and the waters off Africa and Brazil are among the most enticing prospects to which oil companies still have access,” if they want to maintain their edge. Undersea oil exploration in the Gulf accounts for a third of the U.S.’s oil production, argues the Economist, and the “lion’s share” of new fossil fuel discoveries.

In the meantime, the working class population of the Gulf states, people who have lived for generations on income generated by the small fisheries, the crabbing and shrimping industries, are now at the mercies of the sensibilities of huge conglomerates like British Petroleum, Halliburton, and the largest company in the business of undersea oil exploration, Transocean, the owner of the late Deepwater Horison. Transocean, according to its own business offices, has taken great pains in the last few days to petition in U.S. District Court of Texas under the Federal Limitation of Ship owner’s Liability Act in connection with the recent casualty. Transocean claims this is necessary “in order to defend the interests of its employees, its shareholders, and the company” in that order. You have to hand it to the ruling class; they always understand the importance of operatic and symbolic gesture that is designed to protect their own behinds. Why, word has it that President Barack Obama has registered his “livid anger” at the situation. Watch out, world. Obama is about to give a fine theatrical speech. As comedian Chris Rock might put it, some trains are never late.

Incredibly, Transocean has actually turned a profit from this disaster: it has collected $270 million in insurance on the rig, while the cost of cleaning up the mess will in the end fall largely on taxpayer's shoulders.

As for the ecosystem endangered by the demise of the Deepwater Horison, the Brown Pelican and Blue Fin Tuna that rely upon a less stressed environment in order to continue to play their roles in the life balance of the planet, I guess they and we’ll all just have to get over the ongoing murk in this new round of ecological devastation. To paraphrase the late Washington State Governor Dixie Lee Ray, it’s unfortunate that so many people get so upset about a few greasy birds. But we do. Remember: “this land is our land.”

Socialist Appeal and the International Marxist Tendency wish to extend our condolences to the families of the following workers, who died in the explosion of the Deepwater Horison April 20th:

Brothers and sisters, we will honour your memories and struggle on for a world in which the right to work means a hell of a lot more than merely “knowing the risks” and the right to die.

These kinds of disasters need not happen, certainly not on this scale. And it is not just British Petroleum, Transocean and Halliburton. All the mega corporations on the planet make their obscene profits off the labour and suffering of others, with complete disregard for the effects on the environment and future generations. As with the banking industry, they play games with the lives of millions, hysterically reject any kind of government intervention, but are quick to pass the bill for the clean up and the far-reaching consequences of these avoidable tragedies to the public.

This is yet another example of why the working class majority of society needs to take political and economic control into its own hands. This is why we are for the nationalisation of the oil corporations and related industries under democratic public control. The ill-gotten assets of these companies should be seised and used to clean up the mess and retrain oil and coal workers as we transition to renewable energy. Of course, the two parties of Big Business in the US are not about to do any of this. Only a government that represents the interests of the working class majority could even pose the need for such measures openly. Ultimately, only the socialist transformation of society can ensure that we have truly democratic control over production, distribution and exchange, in harmony with the environment.