More than ten years after the revolutionary “reformasi” movement in Indonesia, the thirst for Marxist ideas remains unquenchable. Those ideas continue to inspire left-wing student and workers activists and induce fear among the ruling classes. The fear of communism, instilled by the terror of the Suharto dictatorship, has not completely been removed but it has been eroded. 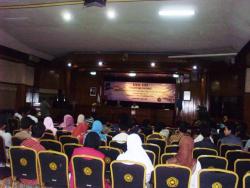 MalangOutside the academic milieu the study, the discussion and of course the agitation of scientific socialism is still banned, “democratically” banned, that is. Often public left-wing activities on the main island of Java face intimidation and attacks by organised Islamic thugs. They act in coordination with right-wing political groups and the state apparatus, the police and the military.

The concrete experience of the youth, the poor and the working class with bourgeois democracy has produced much disillusionment. The revolution of 1998 was aborted and channelled into safe bourgeois democratic forms. The regime itself is the continuation of the dictatorship of the rich, the bureaucrats and the military in a democratic disguise. This has become a generalised point of view on the archipelago.

Working and living conditions have worsened. But the new generation of activists does not share the same illusions in democratic reform that imbued many of the leaders of the 1997-98 movement. More than ever the ideas of socialism are at the heart of the strategy for social change. “Socialism the only solution” has become the catchword of many left-wing groups today.

From Islam to socialism 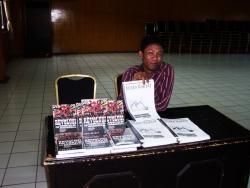 In these conditions the first ever Indonesian edition of the Revolution Betrayed by Trotsky  was quite a challenging enterprise. Meetings were organised in Bogor, Cirebon, Yogyakarta, Jombang, Malang, Gresik, Bandung and Jakarta, while a meeting in Surabaya was cancelled at the last moment. The activities took place in universities, student campuses, the offices of human rights associations and trade union headquarters.

Significantly, some of the activities were organised in conjunction with the student organisations linked to the two main Islamic movements. Nahdlatul Ulama (NU) is a Sunni inspired movement and political party which in the 1960s supported General Suharto. NU is best known to people today thanks to the brief but lively presidency of its leader, Abdurrahman Wahid.

The activists of NU actively participated in the massacre against the Indonesian Communist Party. What an irony of history it was therefore to speak on Marxism at the invitation of the grandchildren of those same people who 45 years earlier hunted down and killed communists “en masse”. The other Islamic student movement which showed interest in Trotsky’s book was the so-called modernist Muhammadiyah. This current is politically more right-wing than NU. This Islamic interest in Marxism goes back to the early 20th century when the PKI was born out the Sarekat Islam. Some religious leaders, like Hadji Misbach, embraced openly socialism and communism. 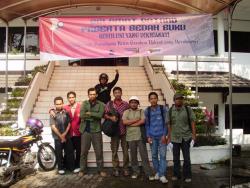 MuhammadiyaAn inspiring meeting was organised at the Universitas Muhammadiyah Malang (UMM). The local Hands Off Venezuela branch joined with the Muhammadiyah student movement at the university to organise this activity. Together with Jean Duval, who presented the Trotsky classic, spoke a young university political science professor. The activity was introduced by the Dean of the Faculty of Political Sciences, who praised the new spirit of open, critical and progressive thinking of the university. The professor of political science was invited with the aim of having a contradictory debate, one side defending Marxism the other side opposing it.

To my surprise and even more to the astonishment of the more than hundred students and activists he described my lead off as acting as a necessary ‘icebreaker’. It was the first public debate or lecture on Marxism ever at this university, which is considered the biggest in South East Asia. It was also an opportunity to abandon the old prejudices and fears inherited from the New Order epoch. The professor, although not a socialist, agreed in particular with the importance of discovering Marxism freed from its Stalinist mutilations. He approved my call to the Muslim students in particular not to be afraid of studying the works of Marx, Engels, Lenin and Trotsky.

Another meeting was held at a university in Yogyakarta with the “active” presence of the famous writer and sociologist George Aditjondro. In the 1990s he became widely known as a critic of the Suharto regime and its corruption. He currently teaches Marxism at a university of the Jesuits in Central Java.

The other meetings especially with worker activists were the most interesting. They were also the most decisive. Here you felt how theory was combining with practice, with socialist ideas becoming a guide for practical activity. The meetings were organised by the left-wing trade union SPBI in Jombang and Gresik in East Java and media and other unions in Jakarta. Activists from different industries and street artists discussed Trotsky’s book, but also the Latin American revolution during long nights in the headquarters of the union or the local “warkop”, the coffee or tea shops on the side of the road. Not a few had joined the new group of the IMT in Indonesia, Militan. All of them are conscious of the many difficulties on the road to socialism. But studying the book Revolution Betrayed will give them a clear idea of how Stalinism has deformed Marxism and how the mistakes of the PKI leadership in the 1960s can be avoided in the future.