One of the salient features of a revolution is that the masses conquer the fear of the state and repression. This has been graphically demonstrated on the streets of Egypt. At the same time the surge of a mass upheaval breaks the taboos in the psychology of the soldiers and the army begins to cleave on a class basis. A rare fraternity between the security forces and the masses, whom they are supposed to crush, develops as the revolution blossoms. 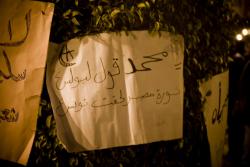 January 30th - "Muslims and Christians united Against Mubarak" - Photo: 3arabwyAstonishing scenes were witnessed in Cairo, the largest capital of the Arab world, during the present uprising. Apart from the embraces of the soldiers on the tanks, on January 31st 2011, a French built Gazelle of the Egyptian Air Force flew low over the crowds probably with orders to intimidate and frighten the masses on the streets from the military elite. But the people cheered and waved at the fighter jet and the pilot could be seen waving back from his cock-pit.

This revolutionary upsurge has defied all the sceptics and cynics on the left and right who had written off revolutionary possibilities from the political agenda. They were in for a shock. The wave of the revolt pierced through the prevalent political setup of the pro-imperialist liberal, secular and despotic regime of Mubarak and the Islamic fundamentalist opposition of the Akhwan ul Muslimeen. As in Tunisia the masses have rejected the notion spread by the mainstream media that the only opposition to the pro-imperialist despots in the Middle East is that of the Islamists. The presence of large numbers of red flags with hammer and sickle in the demonstrations in Tunisia, Jordan, Yemen and Egypt symbolised the left currents in these movements.

The present revolutionary upheaval in Egypt has been unleashed after fifty nine years. In 1952 the corrupt and the despotic monarchy of King Farouq was overthrown by radical left-wing officers with the backing of a similar mass revolt. Jamal Abdul Nasser a pan-Arab socialist became the president and embarked upon radical reforms. This triggered a whole series of revolutionary changes throughout the Arab world. From Yemen to Syria and from Algeria to Iraq and Sudan the right-wing despotic regimes were toppled by these movements.

After the First World War the imperialist victors had divided the single Arab nation by creating artificial states and boundaries to perpetuate their plunder. For example, through the Sykes-Picot agreement of 1916 the British and the French divided up among themselves the control of Iraq, Syria, Jordan and Lebanon. Similarly through the Balfour Declaration the British were given the mandate of setting up a Jewish state in Palestine.

The upheavals in the aftermath of World War II led to revolts against the imperialist stranglehold and exploitation in the Middle East. But With the collapse of the Soviet Union and the capitalist degeneration of the Chinese bureaucracy, most of the Proletarian Bonapartist regimes also began to degenerate and imperialism was able to have a greater hold in the region in the 1980’s and 1990’s. 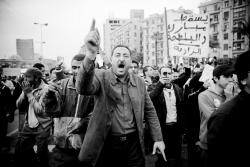 January 30th - Demonstrators in Tahrir square - Photo: 3arabwyThe present uprisings are a turning point in the history of the region. In Egypt and elsewhere the root cause of these movements are a rapidly intensifying socio economic crisis, with steeply rising levels of poverty, price hikes, unemployment and corruption. The seething hatred of the masses against Mubarak and other despots of the region stems from this aggravating exploitation and oppression.

The western intelligentsia and the media are trying to subvert the real causes by substituting a political formula for a social content. This will not solve anything. The imperialists are terrified by this spontaneous upsurge of the oppressed Arab masses. A mainstream American paper commented, “The U.S. supported Mubarak because of two fears: the fear of another Khomeini and the fear of another Nasser. Both anxieties remain entirely legitimate today.”

But Islamic fundamentalists and imperialists have been old bedfellows. After all the Ikhwan was propped up and funded by the Americans in the 1950’s to counter the threat of the abolishment of capitalism in Egypt. El Baradei is a transitional figure and could be used for western interests for a short span. It is probable that the CIA is already in covert negotiations with the Brotherhood for a future set up. But with the looming crisis of capitalism that won’t be much of a solution for any kind of a stability in Egypt.

The Liberal secular rulers and the Islamic fundamentalists subscribe to the same economics - capitalism. The capitalist crisis on a world scale or in Egypt is not going to die out anytime soon. Hence the possibility of any serious reforms for the masses does not exist.

However, revolutions of this intensity and dimension cannot go on forever. The possibility of the derailing and the exhaustion of the first wave of the upheaval cannot be ruled out. Even Mubarak could lurch on for some time after this marvellous movement which was his nemesis.

The biggest tragedy for a dictatorial or autocratic regime is that it pushes the consciousness of the masses back and creates illusions in accidental figures and bourgeois democracy. This is more pertinent in a situation where a revolutionary movement erupts without the presence of a revolutionary party with a rock-solid ideological foundation, flexible strategy and tactics and a steeled cadre organisation that can replace the bourgeois state.

Unfortunately this is the case in Egypt at the present moment in time. A revolutionary ferment is sweeping across the country and yet there is the tragic absence of the subjective factor that could lead this revolution to a socialist victory. Trotsky remarked in 1938, “The historical crisis of mankind is reduced today to the crisis of the revolutionary leadership”. How true this rings for the situation in the Middle East and especially Egypt.

This means that the process will become more protracted and somewhat convoluted. But this revolution has brought the situation beyond the point of return. It won’t take another 59 years for a mass insurrection to erupt. It is the beginning and not the end of a new period of class struggle and revolutions. History is very economical. In the last three decades of a relative lull in the class struggle the influence of reformism and Stalinism has been cleansed from the workers’ movements by history. A socialist transformation remains the only path to salvation today.