The workers at the Foshan Honda plant in China won a 35% wage increase after taking strike action which started on May 17.

The agreement, which was reached on June 4, represents an average monthly pay rise of 500 yuan. A regular front-line worker whose wages were 1544 yuan before, will see his wages increased to 2044 yuan after the pay rise - a raise of 32.4%. The intern employees, who represent a large part of the workforce and have played a key role in the strike but receive much lower wages, will get a raise of 634 yuan from the current rate of 900 - a raise of more than 70%.

This represents an important victory for the workers and their unity in the face of repression on the part of the company and the official ACFTU “union” officials. The attempt by the company and the ACFTU to break the strike (bullying trainee workers, sacking two of the early strike leaders, using ACFTU thugs to physically attack the workers, etc) failed. The strike was becoming a cause célèbre nationally, and there was a clear danger of strike action taking place in other parts of the country.

A short strike by 1,000 workers at the Beijing Xingyuche Technology Company which makes car parts for Hyundai, was quickly settled when the company offered a 25% pay raise. The workers were clearly aware that paralysing that plant would have a knock on effect on Hyundai production in other plants (like in the case of Honda Foshan) and also moved towards the formation of a trade union organisation able to negotiate with the bosses on other pending issues.

Seeing that repression could not stop the movement, the state intervened at the highest level in order to settle the strike peacefully by making substantial concessions to the workers. Honda operates in China through a joint venture with Chinese State Owned Enterprise Guangzhou Automobile Group. The vice chairman of the company, Zeng Qinghong, also a member of the National People's Congress was sent to the Foshan plant to try and settle the dispute.

After getting guarantees from him that worker representatives would not be victimised, the workers democratically elected a negotiating committee of 16 to start talks with the company. Also present at the negotiations was one of the country’s top scholars of Labour Law, professor Chang Kai.

The agreement reached is a clear victory for the workers, but above all it represents a clear leap forward in their consciousness. They have achieved this victory through collective struggle and through democratically elected representatives. This will certainly be a marker for the future and an inspiration for other groups of workers throughout China who are discussing the lessons of the strikes in countless internet forums. As a statement from the “Workers Forum” says clearly: “We will try our best to spread the spirit of struggle of the Honda workers all over our motherland, and let the workers of all the factories in China feel your indomitable spirit.” This is also the reason why the Chinese state has gone to great lengths to try to suppress the letters that the democratically elected worker representatives have issued.

The argument that Mr Chang has been promoting is that the establishment of genuine trade union representation for the workers would in fact lead to a decrease in the number of conflicts and a more “harmonious” relationship between labour and capital, where disagreements would be resolved through negotiation. These ideas have had an impact on the 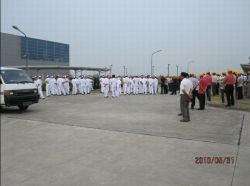 workers, as can be seen in the statement they have issued announcing their victory: “Only with a real and effective communication platform between the two sides can further disputes be prevented and harmonious labour-management relation established.” They say. However, the most important lesson has been learnt:

“For the protection of workers’ rights and the right to democratic election of worker representatives, the workers of Honda Auto Parts Manufacturing Co. Ltd has stopped work for nearly half a month. During the stoppage of work, we received support from both the domestic and international communities. The support has given tremendous boost in the morale of the workers’ struggle!”

As soon as the workers start to assert their power and demand improvement in their conditions, all the talk about “reasonable agreement”, “effective communication” and “harmonious labour-management relation” will be blown to pieces and the workers will be forced down the path of struggle, now that they have learned that the struggle pays off.

According to a report from the Southern Workers Network immediately after the victory of Honda Foshan workers, 1,000 workers walked out of a big electronics factory in Longhua, Shenzhen, demanding a pay raise of 30%, from 900 yuan to 1200 yuan a month, as well as, Sunday rest. They were met with violence from the security guards and local police.Another dispute which has attracted national interest, involves thousands of workers at a privatised cotton mill in Pingdingshan, Henan. They have been on strike since the middle of May, with 5,000 workers blockading the main entrances to the factory. The workers were protesting corruption during the privatisation process and are fighting against the loss of rights and conditions. On June 1st, some 3,000 police officers were sent in to break the strike and 20 female workers were arrested.